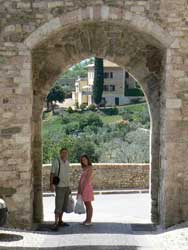 The Best Time of the Year to Visit Italy

The Dream of Italy recommendation is ANY TIME is great!  However, bear in mind that there are some factors to consider if you can choose any time of the year.

Firstly from October through to March is definitely the "off season" and in the winter months, there are positives and negatives.  Firstly, there will be fewer tourists, which is a great plus.  You will be able to see the sights in a relaxed manner.  On the negative side, the days are shorter and in the North particularly, unless you are going for a skiing holiday in the Dolomites, you may have to contend with very cold weather and sometimes snow interrupting your travel plans.  In addition, some attractions and other tourist facilities in some places close for the winter months.  Apart from that, this is a great time to visit Italy, especially if you wish to go the the Venice Carnival, which is usually in February / March.

April to June and September to October are the "shoulder seasons" and are our usual favourite time to visit, before the hordes of tourists descend or after they are back home

August is generally a month to avoid, as it is stinking hot (we have been there in late July and it has been well over 40oC) and many Italians simply take the month of August as a holiday for this reason.  They are all at the beach, mingling along with you!

The South of course is generally hotter than the north, although on our last visit in May / June, it was far hotter in the North than the South due to weather conditions.  You can get storms coming down from the North, which combine cold winds with rain and in the South where we were expecting high temperatures, it was sometimes cold, with temperatures in the low 20oC range.  Similarly, weather patterns coming in from the African continent can bring searing hot temperatures, so be prepared for either!

We used to get Travellers' Cheques issued before we visited Italy. We never do this now. The best option is to find out before you leave which European or Italian bank has a relationship with your local bank and then seek out a 'Bancomat" or money machine from that bank to withdraw cash when you need it.  If you don't use the bank with an affiliation to your bank, the transaction fees and exchange rate conversions can be hefty.

We have never had money stolen in Italy, but are also under no illusions that we have been fortunate.  Italy's reputation for pick pockets is well founded and still true unfortunately.

Kathy's father, who was just like a local, when leaving Italy after 6 years there, had withdrawn the final balance from the bank and closed the account.  While on the bus returning home, there was a "commotion" on the bus with an old woman collapsing.  Everyone "squashed together" to allow her to get off the bus. When he got home, Dad found that his entire wallet containing the final balance of the savings was gone.  The entire event had clearly been staged and the thieves struck it lucky on this occasion.  The "squashing together" enabled them to do their deeds while everyone's attention was on the old woman.

So, be aware of the risk.  Watch who is following you or approaching you with a newspaper open and be wary when in crowded spaces.  The pick pockets are often extremely adept and clever. We have known of others who have had their wallets stolen from the inside of their jacket pocket, the contents removed and the wallet replace without them ever knowing (while they were wearing the jacket)!  Places with lots of tourists are of course prime targets, so when you are visiting the sites like the Colosseum or the Sistine Chapel etc be especially vigilant.  Particularly if everyone is looking in one direction or up at the ceiling!

However, I also have a contrary personal experience.  Whilst boarding the Eurostar in the Rome Termini station, I was heaving luggage up into the carriage and finally got on myself when a young girl came along the corridor holding my wallet and asking if it was mine! I eagerly took it and expected to find it empty, but it was untouched.  I was totally amazed by this.  I would have tipped the girl handsomely if I had found her again, but I never saw her.  I wonder if this was her plan all along, but I at least all my credit cards and cash were intact.

So, no personal experience of theft, but be wary.