Home > About Italy > All About... > Calligraphy

Calligraphy is an art form of beautiful handwriting, dating back to the variations of an alphabet originating over 3000 years ago. Calligraphy can be seen in many cultures and languages, from Chinese, Korean and Japanese to Arabic and European calligraphy. Further variations of their calligraphic styles are seen within these cultures, deriving from different countries and periods of time, such as the emergence and use of Gothic in medieval Europe and Italic during the renaissance. 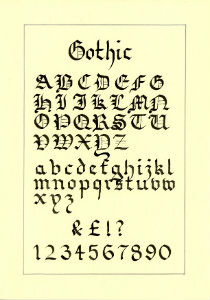 Primarily a skill reserved for scribes, the invention of the printing press in the 15th century made the easy reproduction of texts easier, and the need for scribes diminished as there was a better alternative to hand copying, thus leading to calligraphy becoming a less sought skill.
Though mostly replaced by computerised fonts, handwritten calligraphy is still found today in lesser extent in places such as formal wedding invitations or name cards. There are still people and societies who practise it as an aesthetically pleasing art form or a recreational activity, as well as a few companies that still specialises in calligraphic writing.

With a bit of patience and practise anyone can learn calligraphy. Whether you choose to write with a feather quill pen or a fountain pen, there are many resources for learning calligraphy. Books and videos have different advantages and are widely available. Videos can show you the handwriting technique and books on calligraphy will help you with further mastery through practise. And of course we also have our selection of Calligraphy Sets and supplies you will need to get started, containing everything from feather calligraphy pens to timeless ink pens, inkwells and blotters.

To give you a good introduction into calligraphy we have embedded an introductory video of how to start writing calligraphy. We also provide a number of calligraphy books through Amazon.com

Here is a video giving an introduction to the technique behind calligraphy, showing that there are still artisans specialised in modern day calligraphy.

There are  calligraphy classes available, which may be a good solution for those interested in learning calligraphy, as a teacher can help you learn the correct techniques and provide useful feedback. Auckland residents will have the opportunity to sign up for calligraphy courses at Parnell Community Center (external link)

For those interested in seeing what 25 years of experience in calligraphy can amount to, this video will give you a good example, and hopefully leave you with the impression of why it can be considered as a form of art.