Home > About Italy > All About... > History of the Venice Carnival

The Venetian Carnival is one of the oldest festivals in the world celebrated annually in Venice, Italy. The meaning 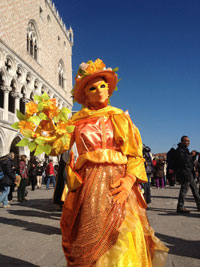 of the world ‘carnival’ (or ‘carnivale’ as they call it in Italy) is possibly derived from the Latin words ‘carnem levare’ or ‘carnelevarium’ which can be translated as ‘to take away’ or ‘remove meat’.  The world carnival could also be from the Latin words ‘carne vale’ or ‘farewell to meat’. The meanings of the word are not surprising as the Carnival starts around two weeks before Ash Wednesday which is the first day of Lent (the Christians tradition of the forty days fasting period before Easter during which meat is not to be consumed). These days the Venice Carnival takes place in February and it end on Shrove Tuesday that is also known as Fat Tuesday.

Masquerade costumes and masks have always been the major feature of the Venice Carnival. In ancient times we know that masks were worn to protect a wearer’s identity. Masquerade costumes and masks were able to remove any social differences and everyone felt equal for a night being captivated by the magic of the Venice Carnival. There are not many documented sources that can with certainty tell what the origins of Venetian masquerade costumes and masks and the Venice Carnival’s history. One of the first documented references of people wearing masks goes back to 1268 when people were banned from wearing masks while playing a variety of games. Another document from 1339 refers to another law that prohibited masked people from visiting nun's convents and banned people from painting their faces and wearing false beards and wigs. This was to protect residents from robbers and murderers that took advantages of the disguise. 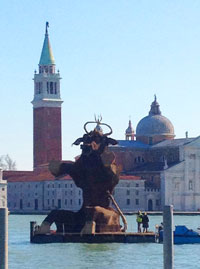 The actual tradition to celebrate the Carnival may have started with the celebration of the victory in 1162 over Ulrich II of Treven who was the Patriarch of Aquileia (an ancient Roman city in Italy). He was taken prisoner together with his 12 vassals and later released on the condition to pay a tribute to Venice that included a bull and 12 pigs which were slaughtered every year on Holy Thursday in the Piazza San Marco in front of Venetians to commemorate the victory. On that Thursday the street celebrations, games, people dancing and bonfires would take over the streets of the city.

In 2012 our son was in Venice and took the picture at left of a huge bull on a barge in the Grand Canal for the Carnival that year.  This bull was set on fire after night fall and together with a huge fireworks display marked the ancient tradition of the provision of a bull for the pleasure of the Venetian people.  Thanks to Ulrich II!

By the 18th century the Venice Carnival gained international popularity and became the biggest festival in the Europe. Music and dancing continued day and night. The Carnival attracted people from different European counties and even young Princesses and Princes became regular visitors. Venice became the capital of gambling and entertainment. It was the ‘Las Vegas’ of its time! Carnivals continued for nearly half of the year. The paintings of Francesco Guardi and the diaries of the well-known Venetian ‘womanizer’ Giacomo Casanova perfectly reproduce atmosphere of that time.

The Venice Carnival’s popularity fell into decline after the Austrians took control of Venice and for nearly two centuries the Carnival almost disappeared. In the 1930s Venice Carnival was banned by Mussolini but fortunately the tradition of celebrating the Carnival, wearing masquerade costumes and masks was revived in the 1980s.